We talk to a founder of a new London-based investment firm that holds bitcoin. It argues that when managed in a controlled manner, exposure to the cryptocurrency can add valuable returns to a portfolio. Price action in bitcoin remains volatile.

Thereâs a drumbeat of noise around bitcoin. The cryptocurrency is becoming more mainstream although price action remains unnerving at times. It is drawing backing from banks and institutional investors. The âWild Westâ perception of these âcoinsâ is shifting. To give just one example, Guggenheim Partners, the US investment firm, last November reportedly filed with the US Securities Exchange Commission to enable one of its funds, dubbed the Macro Opportunities Fund, to allocate millions of dollars in bitcoin.

Bitcoin has been propelled by a desire for âapolitical moneyâ that isnât at the mercy of governments and money-printing central banks, as well as by a desire for privacy and interest in the possibilities of tech.

Price action in the currency has been volatile, and certain governments remain wary, fearful that it can be used as a channel for dirty money. (Defenders say transactions actually leave an audit trail and that they arenât totally anonymous.) In early January bitcoin surged to more than $41,000 per coin; it fell back towards the $30,000 point and has since gained. As of yesterday, it fetched around $36,900, according to Coindesk, a popular platform.

Former investment bankers and industry experts are moving into the space. One recent example is that of Nickel Digital Asset Management. The firm went live in June 2019, founded by three people and now has a team of 20 staff, with senior management coming from Goldman, JP Morgan, Bankers Trust, Morgan Stanley, Rothchild, Bank of America, UBS and few major hedge funds. The founders are Anatoly Crachilov, Michael Hall and Alek Kloda.

This news service recently spoke to Crachilov about Nickel and his ambitions for the business.

âWe intend to further expand the offering by expanding the suite of investment solutions, offering various access points to the digital asset market, while adhering to the principles of transparency and efficiency,â he told this publication. âPeople should have some exposure to the asset class.â

A core part of Crachilovâs argument is that holding some bitcoin in a portfolio can, because of the cryptocurrencyâs qualities, offer downside protection, although if portfolio holdings rise above a certain percentage, it can make investments more volatile. Bitcoin can strengthen a portfolio in small amounts, rather as nickel is an important metal alloy ingredient - hence the name of Crachilovâs firm.

The firm said that having a small allocation to bitcoin â such as 1 per cent â has a positive effect. Its analysis found that between 31 December 2012 and 31 December 2020, a portfolio of 60 per cent equities, 40 per cent Treasuries would have delivered a 124 per cent total return with a standard deviation of 10.0 per cent. Adding 1 per cent of bitcoin to that portfolio would have improved the return to 146 per cent, with a slight decline in realised volatility, benefiting from bitcoinâs qualities as an uncorrelated asset. Further, Nickelâs analysis said that if the allocation to bitcoin had been 3 per cent, the cumulative total return would have been 196 per cent. 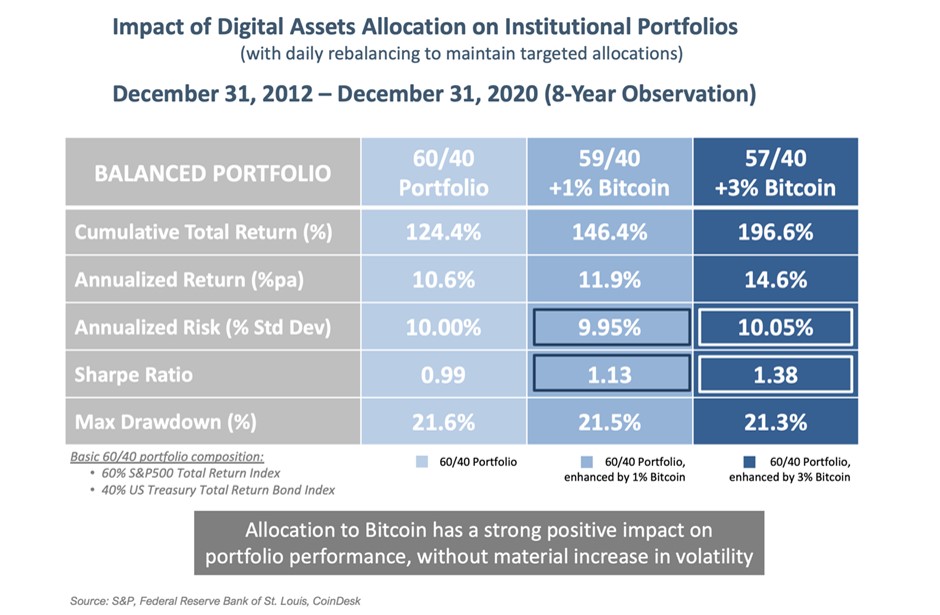 âBecause of its [bitcoinâs] considerable upside potential for the next few years, it can significantly boost portfolio returns for limited downside risk. However, if allocations on percentage terms get much bigger, it exposes portfolios under risk of large swings. Nickel would not recommend that,â Crachilov said.

Crachilov brings plenty of financial sector experience to the table. He has worked in the investment industry in various fields for 25 years. Prior to Nickel, he worked for seven years for Goldman Sachs and JP Morgan. He began to explore blockchain technology and associated digital asset market because when he was at Goldmans, clients were coming to the firm expressing interest in exploring digital assets. Crachilov said he was among the first global cohort of investment professionals to attend the Oxford Blockchain Strategy Programme at the SaÃ¯d Business School, Oxford in early 2018.

Crachilov said he decided to set up a full-service asset management house dedicated to digital assets, working with Michael Hall (who has had over 20 years of experience in running market neutral arbitrage on fixed income and lately arbitrage of digital assets) and Alek Kloda, who has a strong academic background in maths and econometrical economics, etc.

The firm has three funds: Market-Neutral Arbitrage Fund; Digital Gold Institutional Fund, and Nickel Digital Factors Fund. The latest - Digital Factors - was launched in December 2020 and so far only uses the partnersâ money; the fundâs investment thesis and risk management systems are being tested before external capital Is allowed to come in.

Limited supply
At the moment there are 18.5 million bitcoins in circulation, or 88 per cent of the total finite supply, which is capped at 21 million on the protocol level. âThe remaining 12 per cent will be issued over the next 120 years with the last coin coming into circulation in the year 2140,â Crachilov said, referring to the hardcoded and pre-determined issuance schedule of bitcoin. âIt is this transparent and strict monetary policy which attracts increasing attention of investors seeking a refuge from loose monetary policies of central banks around the world.â

There is a need to distinguish between bitcoin as a medium of exchange and store of value. In the former, it is not very efficient. Instead, it will be used as a reserve asset by clients and instruments will be based on it, rather like banks issuing bank notes backed by gold, he said.

Because of inelastic supply models, and rapidly rising demand, coupled with a still-young market infrastructure and retail base, prices will remain volatile for a while. The market is relatively small at about $500 billion, dwarfed by the $10 trillion gold sector and $80 trillion equity area, Crachilov said.

âAs the market matures volatility will fall,â he said.

Custody
One headache for bitcoin has been custody, given potential loss of asset and high-profile stories about thefts and hacking attacks. Last month one story made the rounds about a German-born programmer Stefan Thomas who lost access to his bitcoin stash, worth $220 million, after losing his password. Thatâs the kind of story to give bitcoin holders sleepless nights.

Crachilov said one option is the âhot wallet,â which is a provision for users to temporarily store private keys (eg the password to the asset) while using an exchange, or the âcold wallet,â a self-custody solution, where the private key remains in the investorâs hands via a specialised private key storage device (example: Trezor or Ledger). However, even the latter model would not be acceptable for the fiduciary management, as the holder of the device remains a single-point-of-failure. Hence the need for institutional-grade third-party custodians, he said.

There is a gap in the market for secure approaches to custody.

âWe have engaged third-party custodians to deal with the problem of a single point of failure,â he said.