Global markets fell by broadly 15 per cent and HNW individuals did not escape the pain, with the Asia-Pacific region - one of the hottest ones in recent times - sustaining the largest amount of the drop.

The fall in equity markets last year and slowing economic growth cut the number and wealth of high net worth individuals in 2018, with Asia leading the drop, according to the annual report on such trends by Capgemini.

China accounted for almost 25 per cent of the fall in global wealth while Europe also logged a “noticeable dip” in HNW individual wealth, the organisation said. The only region that saw a rise in HNW individuals’ wealth was the Middle East, it said.

“After a stellar performance in 2017, stock markets faced turbulence in 2018. Amid high volatility, global domestic market capitalisation declined by nearly 15 per cent in 2018. Multiple factors – including a struggling global economy, international trade conflicts, and rising concerns regarding tightening monetary policies – spurred market upheaval. All regions faced market capitalisation decline, with Asia-Pacifc affected the most (down almost 24 per cent),” Capgemini said in its World Wealth Report.

Caution is watchword
Choppy markets prompted investors to hunker down into cash and cash equivalents, the report said. In the first quarter of this year, cash/cash equivalents made up nearly 28 per cent of HNW individuals’ financial wealth, while equities slipped to the second position at nearly 26 per cent (down more than five percentage points).

People’s trust in their primary wealth manager was strong, however, inching up to 79 per cent from 78 per cent between 2017 and last year, the study showed, with North America showing the highest values.

“As the wealth industry evolves and HNWI expectations shift, firms must stay ahead of clients’ value expectations. A focus on fees and service quality will help to attract and retain HNW clients, as unsatisfactory service experience influenced 87 per cent of HNWIs to switch firms,” it added. 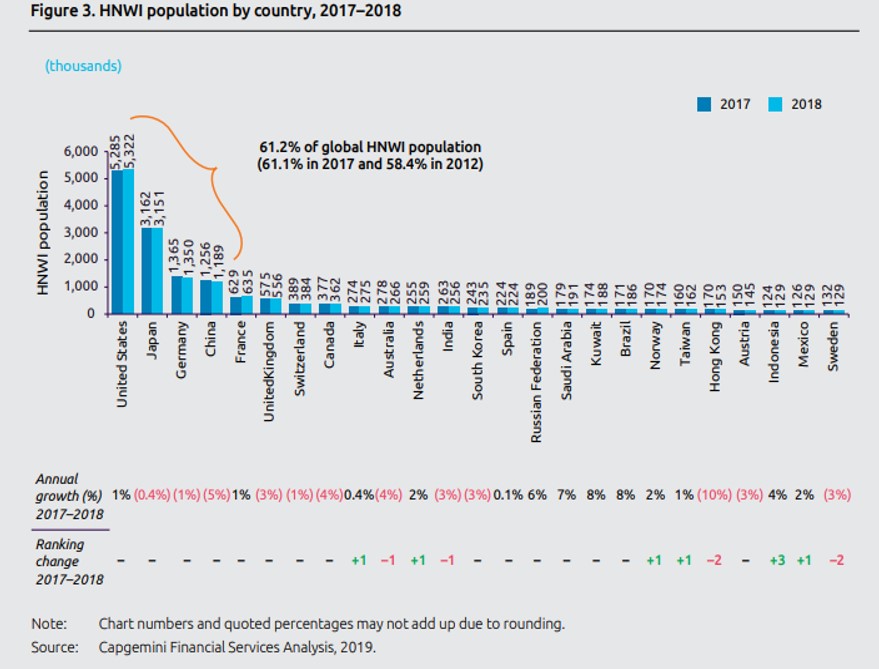