The wealth management firm examines the UK's fractious relationship with the EU bloc and what the effect Brexit may have on the remaining members of the Union.

Written by Frédérique Carrier, head of investment strategy, RBC Wealth Management, this overview analyses how the UK's departure from the European Union will affect the bloc. The item was originally issued as a report by the bank and is republished by this news service with RBC's permission. As ever, the usual editorial disclaimers apply; readers who want to respond can email tom.burroughes@wealthbriefing.com and jackie.bennion@clearviewpublishing.com

Dawn is breaking for a new Europe, with changes that will test its resolve. We look at what awaits the EU and what it holds for investment strategy.

The departure of the influential UK from the EU is the first setback for the bloc’s integration experiment. But paradoxically, it seems to have rallied support for the EU within the remaining 27 countries.

The loss of the UK’s contribution to the EU economy and its budget is unfortunate but should be manageable.

Calls for a larger role for fiscal policy continue. Fiscal rectitude remains the order of the day but increasingly appears to be an antiquated model. Change may be afoot.

The departure of the UK from the EU will be felt in the bloc, but this episode has also increased the union’s resolve and we expect it to adapt to the new state of affairs. After a weak 2019, the EU appeared to be turning the corner as 2020 began, but the manufacturing shutdowns in China brought on by the coronavirus outbreak are likely to push any European recovery into the second half of the year. Some anticipated fiscal stimulus should help matters on the continent, and we continue to see selective opportunities for investors.

The first setback
The EU began in 1951 as a coal and steel trading bloc comprising Belgium, France, Italy, Luxembourg, the Netherlands, and West Germany. Initially, the main purpose was for West Germany to expiate its role in World War II. By partly giving up its national sovereignty and integrating into a larger, demilitarised trading group with strict procedures, West Germany hoped for rehabilitation.

The other five founding members saw an opportunity for reconciliation and sought security in numbers, while France also viewed the group as a potential counterweight to UK and US influence. Since its formation, the bloc has ushered in a period of peace and prosperity unseen in the continent’s history.

The UK was the first member to depart the group, which had grown to 28 nations. Despite being a late joiner in 1973, the UK became an influential EU member, given the size of its economy (second only to Germany) and penchant for free market practices. Along with the Netherlands, Sweden, Denmark, Finland, and Ireland, it formed a group known as the Nordic Alliance, which offset French policies favouring state intervention. The Netherlands, which has tended to keep a low profile despite being the EU’s fifth-largest economy, is likely to fill the vacuum left by the UK, though the Nordic Alliance may see its influence wane minus the UK.

However, the UK’s departure seems to have rallied support for the EU within the remaining countries as the political chaos that has engulfed the UK since the June 2016 Brexit referendum has not gone unnoticed. 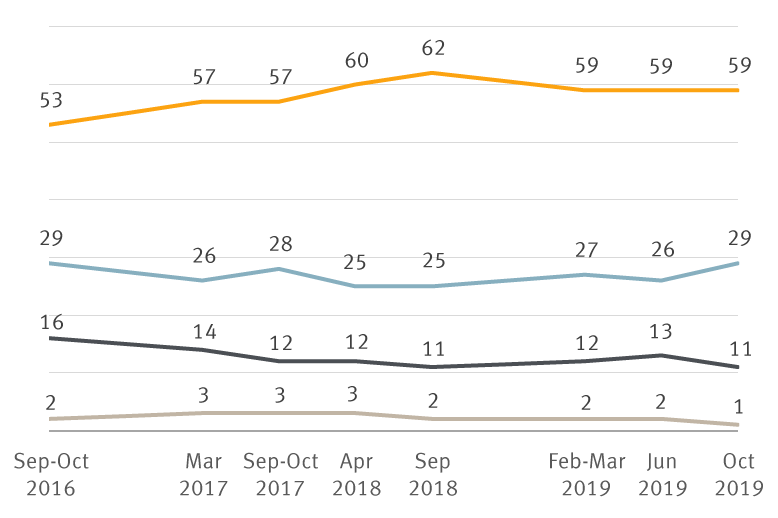 In fact, many anti-establishment populist parties across EU countries have mellowed their EU scepticism, instead railing against immigration to win votes. Populist parties in Italy, Austria, and Hungary all suffered electoral setbacks in 2019 - though admittedly their poor showings could reverse if immigration concerns return to the limelight. As a sign, the danger of a populist government in Italy seems to have passed, the spread of Italian government bond yields over German Bund yields has recently fallen from a peak of 324 basis points (bps) back to the March 2018 level of just 135 bps.

Modest economic consequences
Now with 27 members, the EU will remain one of the top three economies in the world, though its share of global nominal GDP will fall from 16 per cent to 14 per cent, according to the International Monetary Fund.

Should the EU lose complete access to the UK market due to the breakdown of negotiations over a new trade agreement, we believe the impact would be modest as EU exports to the UK represent only three percent of EU GDP. Moreover, the damage would be partially offset by some diversion of trade, investment, and skilled migrants away from the UK to the EU.

Second, the loss of the UK’s net contribution to the EU budget, which amounted to some £9 billion ($11.5 billion) in 2018, will be felt in Brussels, but only over time. The UK will honour its legacy financial obligations of more than £30 billion ($43 billion) per the terms of the Brexit Withdrawal Agreement.

Yet negotiations for the EU’s next seven budget years (2021–2027) are particularly tricky given Britain’s departure, as EU members have to agree how to split the bill.