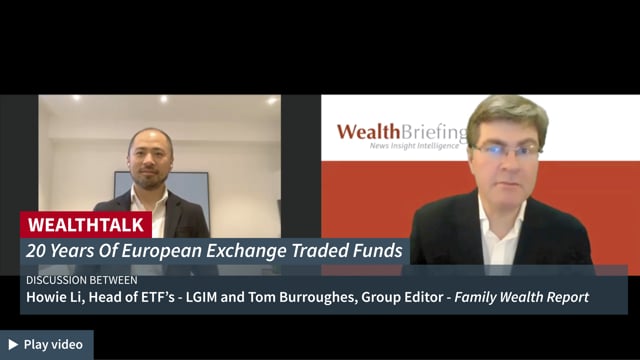 This Wealth Talk interview broaches the 20th anniversary of the European-based ETF market, which has expanded hugely in recent years.

On 11 April 2000, the first two exchange-traded funds based on the EURO STOXX 50 and the STOXX Europe 50 were listed in Germany (source: Refinitiv, Lipper Alpha Insight). As a result of the move, Merrill Lynch International, as it was called at the time, brought a product to Europe which had been used in the US since 1993. Other listings in Europe followed and the market reached â¬ â¬870.0 billion by the end of 2019 (that figure has obviously declined since due to the pandemic).

ETFs track a variety of equity, bond, infrastructure, real estate and commodity indices; they also replicate returns from sub-sectors of various markets, and âsmart Betaâ ETFs track specific drivers of return, such as yield and momentum, in a bid to give users a more âactiveâ form of these entities. ETFs are sometimes placed in the bracket of âpassiveâ funds although, as we at WealthBriefing know, investment advisors often dislike that term. Even a decision to  hold a specific ETF is an active decision. ETFs are increasingly used as building blocks of a client portfolio because they are relatively cheap and liquid.

However, that doesnât mean that the industry is without some issues: ETFs can diverge from indices; some commentators may argue that the inflows and outflows around them can actually distort the very markets they track (although this also opens up opportunities for fast-moving arbitrageurs).

A 10-year bull market in equities after the 2008-2009 financial crash was in some ways the perfect moment for low-cost entities, while rising regulatory burdens and a greater focus on the fiduciary responsibilities of wealth advisors meant that actively managed, more expensive funds were less in favour, while ETFs looked a lot more attractive. Renowned investors such as Warren Buffett have lauded index funds in contrast to, say, hedge funds.

Of course, with a more turbulent market and all the trauma caused by COVID-19 and the associated suppressions of governments, whether ETFs will have another glorious 10 years in Europe can only be guessed at. In any event, WealthBriefing editor Tom Burroughes took time to talk to LGIMâs head of ETFs, Howie Li, about the market and a number of themes within it.

To get involved in our video series, email tom.burroughes@wealthbriefing.com