While Capgemini's 2020 report shows that wealth managers are facing an unpredictable period, it presents opportunities to build more agile and resilient business models.

Client demand for liquidity has come to the fore, while "hyper-personalisation" of service is now a watchword for how wealth management is delivered, according to industry leaders discussing findings of the Capgemini’s annual 2020 World Wealth Report, released yesteday.

This news service listened into a panel of speakers (as described here) talk about the annual report, which shows that North America took the global top spot, recording 11 per cent growth, and outpacing Asia for the first time since 2012. Global growth overall grew by almost 9 per cent reaching $74 trillion in 2019. This comes in spite of slowing economies, the UK's Brexit decision, unresolved trade wars, and Latin America and Hong Kong seeing unrest. Sustainability was pegged as a bright spot, and technology flagged as simply too big to ignore.

The report covers 71 countries by market that make up roughly 98 per cent of global gross national income and 99 per cent of world market capitalization, making it a showcase for major global wealth movements for 2019.

Besides broad trends in terms of numbers, the report examined trends such as how digital technology is gaining ground, accelerated rapidly by COVID-19. Firms that were not sufficiently digitalised prior to the pandemic will have struggled to serve clients through it. At base, wealth management is a service industry and there have been signs that some clients aren't happy and have shifted business, Jeremy Balkin, head of Innovation, HSBC, said in the panel discussion. "Services are everything....we are in a services world," he said.

Other parts of yesterday's Live Linkedin presentations running alongside the report discussed matters such as open banking and wealth management models; how established players should work with third-party disruptors to build digital offerings; the need to embrace new ideas on financial planning; managing entrepreneurs' wealth, and the continuing demand for environmental, social and governence (ESG)-themed investment.

The panellists said that a subject which perhaps understandably arises in a time of financial stress is liquidity. "Access to liquidity is extremely important in this respect," Anna Brugnoli, co-head of wealth planning, UBS, said.

Entering the picture
Although the economic consequences of the health crisis are still too hard to pin down, COVID-19 is part of the narrative. The consultancy firm expects the global economy to shrink by roughly 5 per cent in 2020, and indicated that global wealth is already down by between 6 and 8 per cent up to April 2020 compared with April 2019.

The report echoes warnings put out by the Boston Consulting Group in its 2020 industry report that the pandemic, in all its impact, is a wakeup call for wealth management to put high-touch models in place and not to delay making tough decisions. Both reports have shown how resilient wealth growth has been globally while industry profits have stalled. BCG put profits at $135 billion in 2019 - little change from a decade ago.

By region
In the wealth picture regionally this year, Capgemini found developed markets again leading on growth. North America's 11 per cent hike (adding $2.2 trillion) was far stronger than the 1 per cent it registered in the consultancy firm's 2018 reckoning. Growth breakdown by region is shown here: 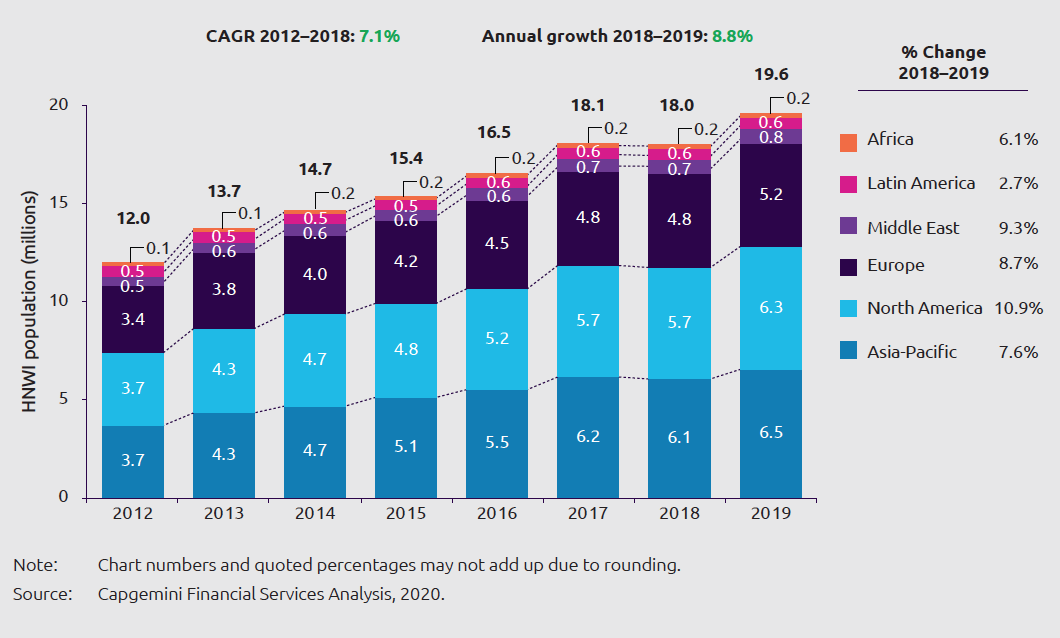 Europe outperformed Asia-Pacific and Latin America, growing its HNW population by almost 9 per cent. The Middle East registered the second highest HNW growth jumping to $2 trillion in assets shared between 800,000 individuals. And, in spite of Brexit, the UK also performed well, growing its population of HNWs and wealth by more than 6 per cent for the year.

Even with strong individual performances from certain Asian countries, APAC fell behind the overall 9 per cent global average, expanding by 8 per cent. But it dominates as a region with roughly half of global wealth. See chart. 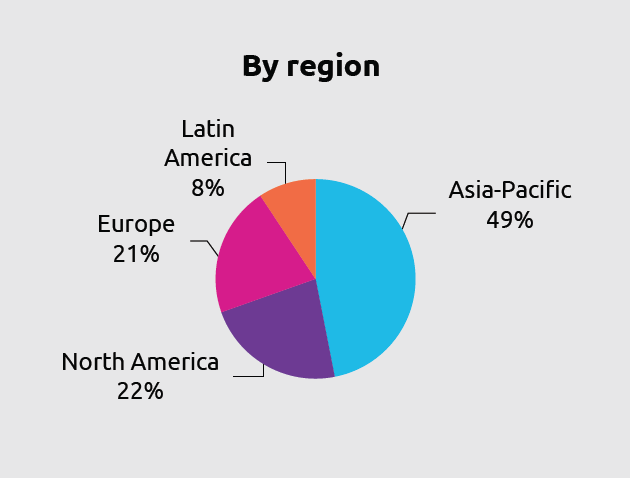 Regional standouts were Hong Kong, China, and Taiwan, all seeing double-digit HNW population and wealth growth; this was somewhat reflected in China’s CSI 300 stock index performance and the government's strong commitment to Chinese domestic growth. (High net worth is defined by assets of $1 million or more.)

Wealth was also more evenly distributed this year between the upper, middle, and lower-tier wealth bands. In 2019, the population of ultra-wealthy, those defined by assets of $30 million or more, grew but the asset pool did not. The report suggested that this higher band tends to invest beyond equity markets which can be unstable in uncertain times. Their bias towards owning local stocks may also have constrained their wealth growth.

Numbers for India, South Korea, and the wealth hub of Singapore were all down on the previous year, based on weaker currencies and economies.

Generally 2019 was a good year for wealth managers
North America shone for the sector, with the region accounting for more than a third of global HNWI population and wealth gains worth $22 trillion. With measures pre-dating COVID-19, the report highlighted a strong Q4 for US equities and a September boost when the Fed pumped billions into the system. Tech also generated market optimism and US wellbeing, with Microsoft and Apple accounting for nearly 15 per cent of S&P gains.

Also a factor is the growing sustainability story and its value-add for wealth managers. HNWs across the board are now paying attention to environmental risks, giving firms “a high-potential product opportunity,” the report said. For ultra-HNWIs in particular, 40 per cent of this group wants to pour cash into sustainable funds.

And wealth managers are ready. “Firms have recognised the trend and are prepared to meet the demand – 80 per cent now offer SI options,” the report said.

Calling socially responsible investing “a rare bright spot in 2020,” the report found investors still expecting financial value. Just a quarter cited a desire to give back to society as s reason for investing sustainably, while 40 per cent expected higher returns for doing so.