As one of the worldâs great emerging market economies, how should India figure in the portfolios of high net worth individuals, particularly when considering the risks and consequences caused not just by the pandemic, but also by changing patterns of global trade?Â

India is a country that can sometimes flatter to deceive, given past promises of rapid growth and the hopes that came with the election of Narenda Modi half a decade ago. India, with its youthful demography and brisk sectors such as software, has strong drivers for growth. So what is the investment case now, given the risks and some missteps in the past?

To address these questions is David Cornell, chief investment officer of The India Capital Growth Fund, which at the end of this November had Â£107 million in assets, and is overseen by Ocean Dial Asset Management. The fund was launched in December 2005.

The editors of this news service are pleased to share these views and invite responses. Jump into the conversation! The usual editorial disclaimers apply to guest articles. Email tom.burroughes@wealthbriefing.com and jackie.bennion@clearviewpublishing.com

With 2021 just around the corner, it feels appropriate to look forward to the opportunities that lie ahead, as well as reflecting on what has been a tumultuous year both for India and for the rest of the world.

Whilst there have been numerous challenges (some of which I have outlined below), we are encouraged by recent activity; daily new COVID-19 cases are declining and economic activity has picked up with over 60 per cent of high frequency indicators (such as car sales, electricity consumption, purchasing managersâ indices, etc) higher than their pre-COVID levels. While we cannot rule out the possibility of a second wave, a low fatality rate (currently around 1.5 per cent), the prospect of a vaccine roll-out and the governmentâs determination to keep the economy on track means that any disruption should be well below the levels that we saw in March.

Early action taken by the Indian government in a bid to prioritise the health of the population over the health of the economy when cases were still relatively low lead to a GDP contraction of 24 per cent in the April-June quarter of this year. As the country ground to a halt, the markets corrected with the BSE 500 Index falling by 41 per cent in US dollar terms between 19 February and 23 March. The small and mid-cap market where the India Capital Growth Fund is predominantly invested, suffered more acutely with the BSE MidCap Index down by 78 per cent in the same period. This was exacerbated by an extended period of underperformance in the small and mid-cap market in 2018-19 on the back of a major banking crisis, reform implementation difficulties and disappointing economic growth. During this time, investors sought relative safety in a handful of large cap stocks, driving a wide divergence in the markets.

Whilst in aggregate, small and mid-cap companies can be less resilient in challenging market conditions, they tend to exhibit stronger performance in periods of recovery. Weâre excited about the upside potential here as India emerges from the crisis and have been positioning our portfolio to capture areas that we believe will be key beneficiaries from shifting consumer habits and business practices.

Private sector banks
Well-capitalised private sector banks are emerging strongly from the crisis and we used the collapse in valuations to add to all four private sector banks in the ICGF portfolio (City Union Bank, Federal Bank, IDFC First Bank and IndusInd Bank). Having steadily gained market share over the past five years, we expect to see this grow further as state-owned banks continue to suffer from poor governance.

Technology is further accelerating this with investments in fintech helping private sector lenders to build strong digital infrastructures. With 654 million mobile internet users in India and data costs among the lowest globally ($0.09/GB), the country is fast adopting developments in fintech and, moving forwards, most people will have a bank branch in their pockets.

Indiaâs data is the cheapest globally: 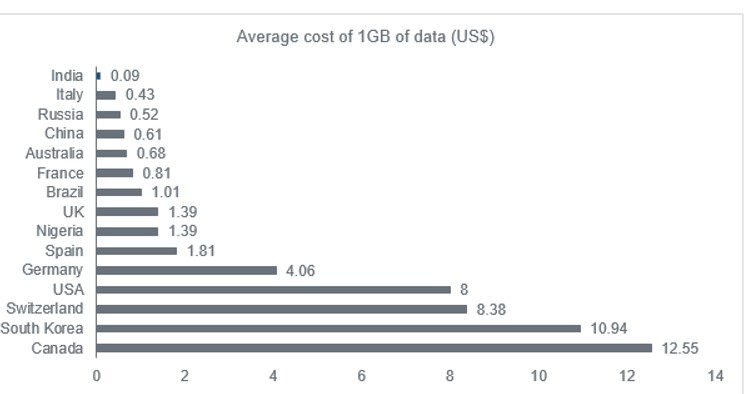 Technology
As indicated above, tech companies are benefitting from the enormous opportunity offered by digital development. With the acceleration of digitalisation forcing change across the whole economy, organisations are spending more on cloud technology allocating funds to platform as a service (PaaS) and software as a service (SaaS) to boost operational agility. A new addition to the ICGF portfolio, Persistent Systems is an IT services company winning business from global corporations wanting to transition to the cloud. Recent management changes and growth in deal wins are filtering into strong results, and it is the only company to post sequential growth in both Q1 and Q2 of FY21 in spite of COVID-related disruptions.

China+1
As multinationals seek to diversify away from China, India is rolling out its China+1 strategy, encouraging global manufacturers to consider it as a viable alternative. It has already made some significant improvements here, namely its leapfrog in the World Bankâs Ease of Doing Business ranking from 142nd five years ago to 63rd today. Recent labour reforms should further help its case, simplifying its complex labour laws in order to be more effective for employees and incentivise organisations to add jobs. As global trade dynamics adjust, companies like Dixon Technologies, a consumer electronics manufacturer, are benefitting, with names such as Samsung, Philips and Godrej on its order book. With a huge domestic market opportunity and the Production Linked Incentive scheme - the governmentâs policy to boost Indiaâs manufacturing capabilities and make it more globally competitive - supporting electronics manufacturing, the company is well-positioned to benefit.

As a destination for foreign direct investment, India has a lot to offer. Its labour costs are around one-third of Chinaâs, it boasts a stable reform-driven government and has the benefit of conducting business in English. We have seen a steady increase in FDI flows over the past ten years, with FY20 boasting record net flows of $43 billion. On top of this, the macro-economic environment remains stable in spite of COVID disruption with low inflation, forex reserves at all-time highs and a more resilient Rupee.

Looking forwards, weâre excited about where India stands today. Along with a favourable macro environment, corporate profitability is currently at 20-year lows having been negatively impacted by the implementation of key structural reforms, something that we expect to reverse over the coming few quarters. With plenty of room for earnings to surprise on the upside, India offers a unique opportunity for investors seeking superior returns. For UK-based investors wishing to access these, they should look to single country funds where they can capture the full potential that India has to offer. 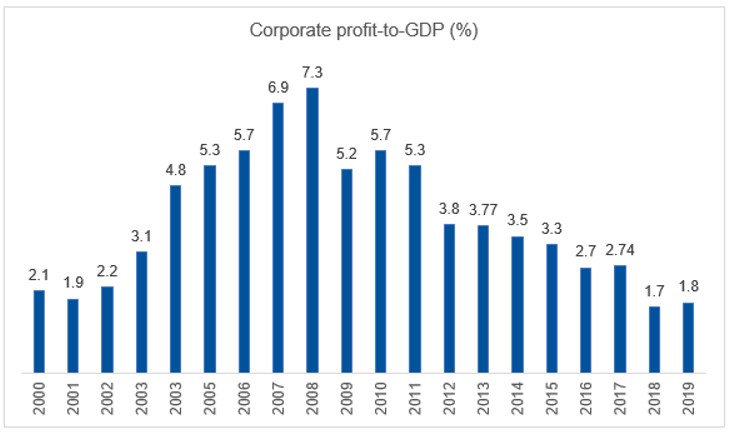