Bitcoin hitÂ $42,000 a coin earlier this month, a rise of 300 per cent since October. Questions abound over its viability. Here Barclays' chief strategist examines its prospects as a portfolio contender.

Bitcoin is rarely out of the frame, either for hitting new records, or as reported by a crypto recovery service this week, for the $140 billion stranded in wallets because bitcoin owners have forgotten their passwords. Barclays Private Bank chief market strategist Gerald Moser considers the progression of cryptocurrencies and whether it's time to add them to portfolios. The editors welcome this commentary, where the usual disclaimers apply. Email feedback to tom.burroughes@wealthbriefing.com and jackie.bennion@clearviewpublishing.com.

There has been a lot of talk about bitcoin, and cryptocurrencies in general, being a “digital” gold. Similar to gold, there is a finite amount, it is not backed by any sovereign and no single-entity controls its production. But for bitcoin to be considered in a portfolio and to become an investable asset, similar to gold, the asset would need to improve the risk/return profile of that portfolio. This seems a tall order.

While it is nigh on impossible to forecast an expected return for bitcoin, its volatility makes the asset almost “uninvestable” from a portfolio perspective. With spikes in volatility that are multiples of that typically experienced by risk assets such as equities or oil, many would probably throw the cryptocurrency out of any portfolio in a typical mean-variance optimisation. 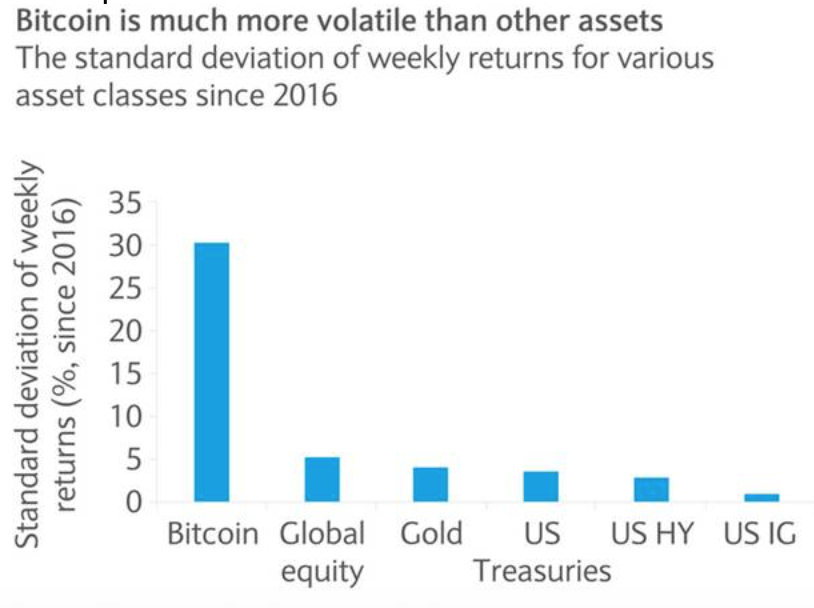 Poor diversifier
And while bitcoin’s correlation measures are relatively supportive, it seems to falter when diversification is most needed, such as during sharp downturns in financial markets. Looking at weekly return correlations since 2016 shows that bitcoin is not strongly correlated with any assets (see below). It is, however, only second to US high yield in its correlation with equities. US Treasuries, gold and US investment grade were better diversifiers than bitcoin when it comes to equities. 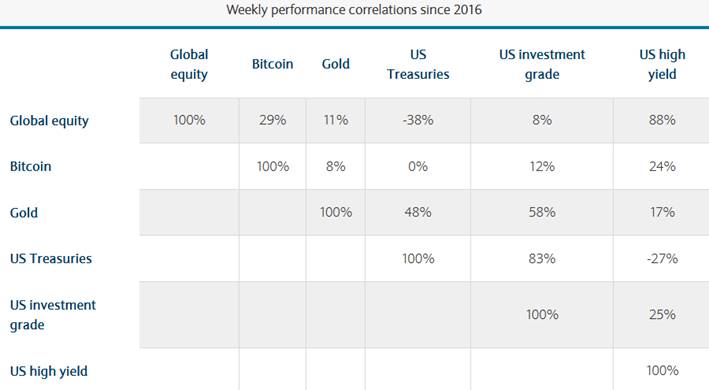 Furthermore, looking at global equity corrections since 2015 (see below), it is noticeable that bitcoin has performed even worse than equities over the last three corrections. And while gold and fixed income provided some relief during those corrections, bitcoin compounded the loss that investors would have incurred from equities exposure.

The fact that cryptocurrencies also fluctuate alongside equities suggests that investment in bitcoin is more akin to a bubble phenomenon rather than a rational, long-term investment decision. The performance of the cryptocurrency has been mostly driven by retail investors joining a seemingly unsustainable rally rather than institutional money investing on a long-term basis.

Several studies around market structure have shown that emerging markets with high retail/low institutional participation are more unstable and more likely to be subject to financial bubbles than mature markets with institutional participation. And while more leading financial houses seem to be taking an interest in cryptocurrencies, the market's behaviour suggests that the level of institutional involvement is still limited. Another concern is around its concentration: about 2 per cent of bitcoin accounts control 95 per cent of all bitcoins.

In summary, difficulty to forecast return, lack of diversification and high volatility makes it hard to consider bitcoin as a standalone asset in a diversified portfolio for long-term investors.