The surge in retail investor trading in shares such as computer games retailer GameStop, cinema chain AMC and now the silver market, has prompted warning noises from regulators and considerable media chatter. What should wealth advisors think about this and what message should go to their clients?

The extraordinary market events of recent days, in which users of popular social media platform Reddit combined to hit short-selling hedge funds in stocks such as GameStop, AMC, and also in the silver commodities sector, raise a number of questions. Are these examples of healthy, if disruptive forces, at work? Is there something more dangerous going on? What, if anything, should regulators do? As for wealth managers and their clients, what lessons can be drawn?

(It is worth noting that as of today, 3 February, GameStop shares sank by a whopping 60 per cent, losing more than $9 billion in market value; AMC dropped 41 per cent. The sharp falls came after CME Group, the derivatives marketplace, hiked margin requirements for silver futures, which on Monday this week had risen by the most in one day for a decade after online traders attempted to boost the price. Silver futures dropped by about 10 per cent yesterday. (Source: Wall Street Journal.)

To try and get a handle on all this, we publish a guest article from UK wealth management house Waverton Investment Management. The article is written by Charles Jones, CFA and Tommy Faber, CFA.

The editors of this news service are pleased to share these views; the usual editorial disclaimers apply, and for readers who want to add comments, email tom.burroughes@wealthbriefing.com and jackie.bennion@clearviewpublishing.com

Before 12 January, very few people would have been aware of the Texas-based video games retailer, GameStop. Like many bricks and mortar store operators, the company had struggled to adapt to the shift towards digital distribution within gaming, a trend accelerated by the COVID-19 pandemic.

Fast forward just a fortnight and more than $29 billion worth of shares in the company traded hands on a day when the worldâs most valuable company, Apple, managed just over $20 billion. GameStop has become the subject of a David-versus-Goliath fight between smaller retail investors acting in concert (unkindly known as âdumb moneyâ by many professional investors following heavy retail speculation during the technology bubble), and the global hedge fund industry.

Drawing up battle lines
Throughout 2020 and heading into the start of this year, hedge funds were collectively convinced that GameStop would go bankrupt on the back of the companyâs weak fundamental outlook. To make money on this view materialising, investors are required to âshortâ the stock. Shorting involves borrowing stock from another investor, selling it instantly and buying it back at a later date (and, hopefully, a cheaper price) at which point the shares are returned to the lender. The trade is profitable if the price declines but importantly, if the shares rise, the theoretical losses are unlimited.

In mid-2019, a user of popular social media platform, Reddit, better known by his tag, âRoaringKitty,â took a markedly different opinion on GameStopâs prospects and began to draw attention to a $53,000 investment he had made in the company. Though initially ridiculed, he remained steadfast and eventually built legions of fans who were empowered by the introduction of zero-fee trading platforms and driven to invest in the stock markets themselves.

Launching the attack
The swarms of retail investors have been guided by Redditâs popular investing chat forum WallStreetBets which has encouraged users to buy shares of not just GameStop but other companies undergoing operational difficulties which the hedge fund industry has bet against. Cinema operator, AMC Entertainment and the reinvented smartphone company, Blackberry are other examples.

This was achieved primarily through options trading, with individual investors paying small amounts of money to buy âcallâ options giving the investor the right to buy a stock at a fixed price in the future. The option seller usually buys the underlying share in the market, so that if the share price rises it already has the stock to give to the option buyer. The frantic options buying by small investors forced option sellers to buy shares in the open market, causing the price to rise sharply.

Casualties
The early casualties were clear. Those hedge funds with short positions in such companies were suddenly trapped in a trade that was becoming rapidly loss-making. As mentioned earlier, the theoretical loss is unlimited and so hedge funds caught in a âshort squeezeâ were forced to start buying back shares of GameStop and other such positions to avoid spiralling losses. This accelerated the rise in the share prices, creating a vicious circle with ever higher losses.

New York-based hedge fund, Melvin Capital, received a $2.75 billion bailout by Point72 and Citadel as its assets more than halved in January alone. There will undoubtedly be more high-profile cases to come.

Last week also saw the secondary impact of these effects in markets. To fund the repurchase of the short positions, hedge funds became forced sellers of well-established companies held in their long book that typically have the best fundamental prospects. The Goldman Sachs Hedge Industry VIP ETF is one of the best representations of these stocks and, as the figure below highlights, this index fell by 4.52 per cent in US dollar terms from 22 January to 29 January. Over the same time period, the top 10 most heavily shorted stocks rose by over 92 per cent. 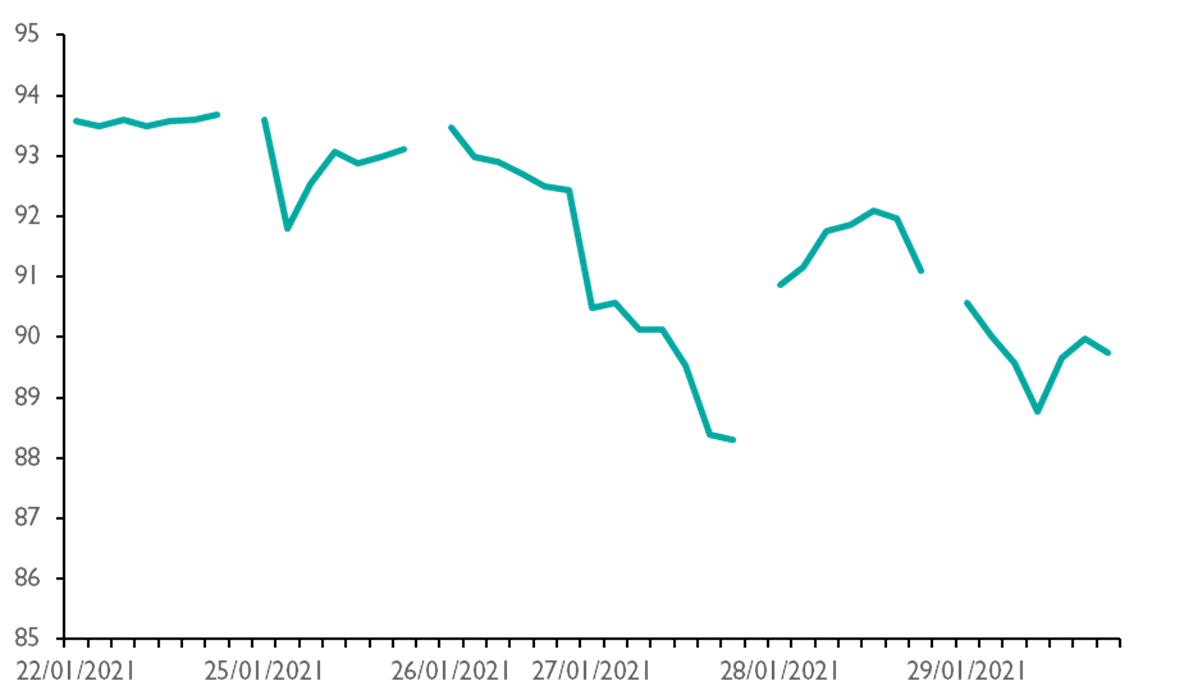 Does David conquer Goliath?
Left untouched, eventually hedge funds will have bought back enough stock to close their short positions, or they will go bust. At this point, buyers of GameStop stock will dry up and the share price is likely to collapse, burning individuals who have purchased call options as these will expire worthless. Additionally, the call option sellers will hold material losses on the actual shares (which they bought in case the call buyers exercised their options). In effect, David is slinging so many stones in all directions that he harms himself as much as Goliath.

Aftermath
The regulators and share trading platform operators face a difficult challenge balancing protecting retail investors from the eventual losses they will inflict on themselves, versus a retail investorâs legitimate right to buy the stock.

US trading platform Robinhood restricted trading in GameStop (and others) on 28 January, only to have to permit it again on 29 January as retail investors filed a class action. The same company was forced to raise more than $1 billion from investors to pay individual investors and provide cash to its clearing facilities to protect partners from losses.

This may not actually be the end, however. The hedge fund industry is always eager to sniff out a profit particularly when it is at the expense of struggling peers.  Attractively positioned shares that become âforced salesâ may themselves become targeted shorts as traders look to benefit from this technical dynamic.

Are there any winners?
It is difficult to estimate how long these dynamics will last but it is possible that long-only investors are the eventual winners, since they can use this market turmoil to buy shares in excellent businesses at discounted valuations with no change to the fundamentals. However, we should not be too complacent. Usually a bubble like GameStop is caused by greed, this one is driven by rage against unfairness in the financial system in which long investors have benefitted. David is being motivated by good old-fashioned vengeance, let us hope he doesnât look for new targets.