Social envy of wealth is much lower in parts of Asia than in many European nations â arguably a reflection of the ascent of a large and growing middle class in Asia. No wonder wealth managers are heading eastwards.

A regular commentator, Germany-based entrepreneur and academic, Rainer Zitelmann talks here about different views that people around the world hold about wealth. (See his previous article here.) He delves into data which highlights the envy people have of others people's success and riches â a taboo subject. Envy, after all, is one of the Seven Deadly Sins. But, to a certain extent, some might not be comfortable with admitting that this motivates their support for demanding higher taxes on âthe rich.â

However, today there are genuine injustices and it benefits no-one to have conspicuous wealth amid great poverty.

Wealth managers need to be aware of this, if only to understand where the best places are for establishing businesses. Given Dr Zitelmann's findings, it is no accident that so many Western banks and wealth managers are setting up shop in Asia.

As ever, the usual editorial disclaimers apply to views of guest writers. Jump into the debate! Email tom.burroughes@wealthbriefing.com

In Asian countries such as Vietnam, Japan and South Korea, the pursuit of wealth [is less controversial] and plays a much greater role than in Europe and the US. Also, social envy is far less pronounced in these countries than in many European countries. That is one of the key findings of an international survey published in the June issue of the Journal Economic Affairs. (1)

The opinion research institutes Ipos MORI and Allensbach surveyed around 1,000 representatively selected people in each of the US, six European and four Asian countries to determine their attitudes towards wealth and rich people. One of the questions was: âFor some people, it is important to be rich. How important, if at all, is it for you personally to be rich?â (Figure 1).

Figure 1: How important is it to be rich? Vietnamese lead the way 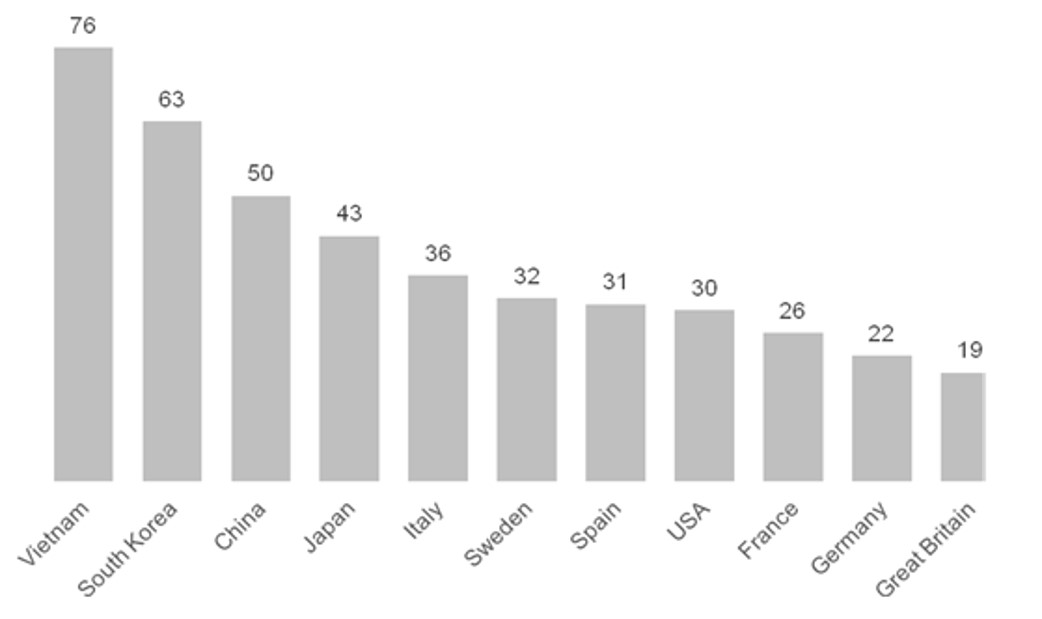 The study also found that in Japan, South Korea and Vietnam, social envy of the rich is only very slight â particularly in comparison with continental Europe. On this point, however, China occupies a special position: envy of the rich is about as pronounced in China as it is in Germany.

In addition to social envy, the study also measured how people in these countries rate the personality traits of the rich. Respondents were presented with a list of positive and negative personality traits and asked which of these traits they would attribute to the rich. In eight of the 11 countries, respondents were also asked whether they themselves knew one or more wealthy people. Interestingly, in all the countries where this question was asked, very few respondents said they would describe the rich as honest. However, when people who personally knew one or more rich people were asked whether they thought the rich person they knew best was honest, the percentage who said they did was much higher (Figure 2).

In Germany, for example, only three per cent of respondents in the overall population said that rich people in general are âhonest,â while 42 per cent said this about the millionaire(s) they know personally. This shows that the image of the rich is very strongly influenced by prejudices, because respondents who know one or more rich people personally have a far more positive opinion than respondents who are only aware of the rich from media reports and films. 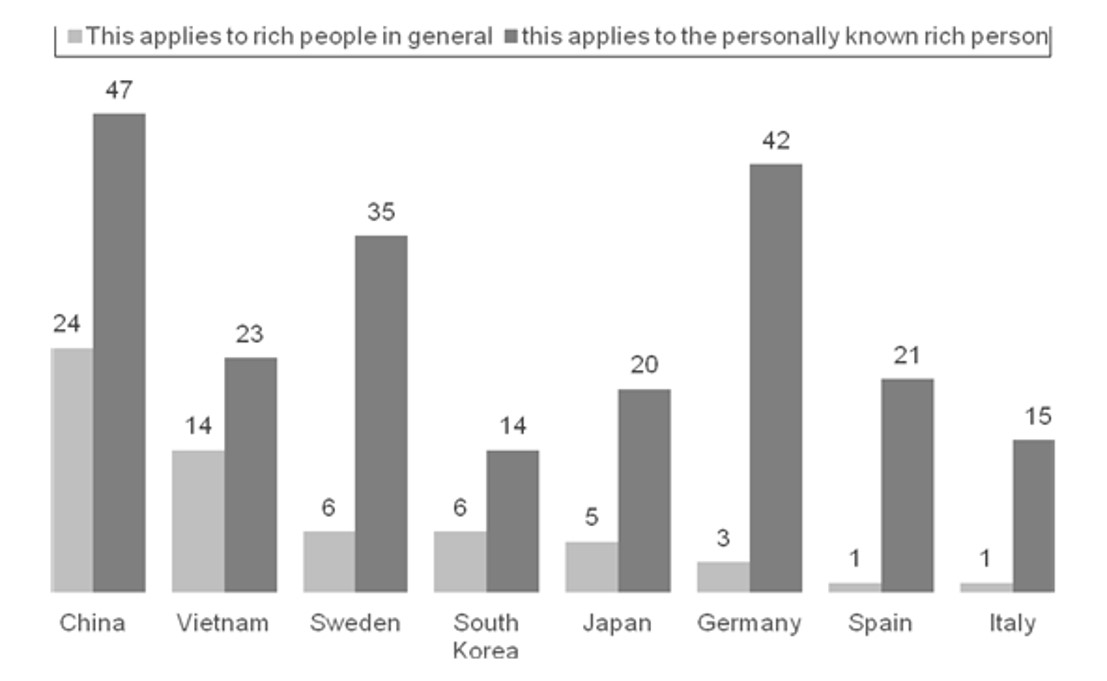 Respondentsâ answers to the questions that measure social envy were then combined with their responses to the questions about the personality traits they attribute to millionaires to provide an overall picture, the âRich Sentiment Index.â This index depicts the extent to which respondents have a positive or negative attitude towards the rich. Figure 3 shows the ranking: the lower the index score, the more positive the attitude towards the rich. Accordingly, the most positive attitudes towards the rich are held by Japanese and Vietnamese respondents, the most negative by the French, followed by the Spanish and Germans.

Figure 3: Rich Sentiment Index: French respondents have the most negative opinions of the rich 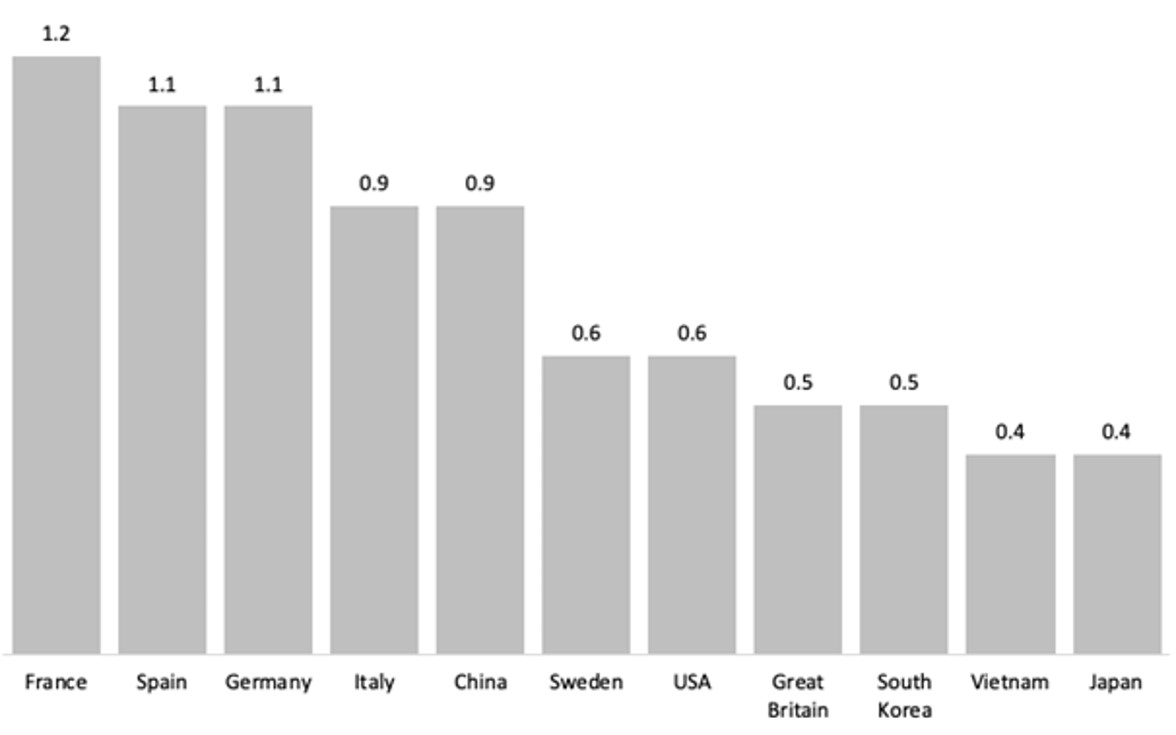 About the author
Rainer Zitelmann is an historian and sociologist and the author of the book The Rich in Public Opinion, which deals with prejudices and stereotypes about rich people.