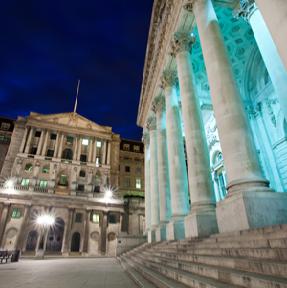 The UK's central bank has pushed up its official borrowing rate by 50 basis points, as inflation pressures continue. In the US, the Fed has raised rates by 0.75 percentage points.

Yesterday, the Bank of Englandâs Monetary Policy Committee agreed to hike interest rates by 0.5 percentage points to 2.25 per cent. The UK central bank disclosed that three of its MPC members wanted an even larger rise, of 0.75 per cent, while five voted for 0.5 per cent and one preferred only 0.25 per cent.

At the same meeting, all MPC members wanted to cut the stock of purchased UK government bonds, aka gilts, financed by issuing central bank reserves by Â£80 billion over the next 12 months, to a total of Â£758 billion.

Governments around the world are pushing up interest rates to cope with high inflation, blamed on causes such as more than a decade of quantitative easing, pandemic-induced supply chain disruptions, âGreenâ energy transition policies that squeeze fossil fuel use, and Russiaâs invasion of Ukraine and the subsequent cut to gas exports to the West. Ironically, the spike in energy costs â when passed to consumers â can act like a âtax on growth.â A big question mark is that if governments cap prices, they may have to eventually ration energy use by business and the public. (Contrary to what politicians might like to think, the laws of economics havenât been suspended.)

This week, the US Federal Reserve also hiked rates, and did so by 0.75 per cent, or 75 basis points.

The inflation spike, and the policies to handle it, have certainly forced wealth managers to go back to the drawing board to assess asset allocation and risk management.

Here are reactions from a variety of firms about the BoEâs action:

Scott Taylor-Barr, financial advisor at Shropshire-based Carl Summers Financial Services
"This was a masterclass in political manoeuvring from the Bank of England. Allow rumours of a 0.75 per cent increase to run wild and then, when you only raise it by 0.5 per cent, we all feel we've dodged a bullet.

In terms of mortgage borrowers, the rate rise will filter through to those on variable rates over the coming days and weeks, but for those on fixed rates nothing will change. For now. lenders have already increased rates on their new business deals in recent weeks, pre-empting this rise, so it's unlikely we'll see any dramatic market shifts. This increase was a surprise to no-one.

The real issue, however, is the push-me-pull-you that appears to be happening between the bank, who are increasing interest rates to try and stem inflation, and the government, who are injecting cash into the economy in terms of energy price caps, direct support with energy bills and tax cuts. All these moves are likely to increase inflation and so undermine the bank's attempts to control it, potentially, leading to further rate rises."

Anil Mistry, director at Leicester-based broker, RNR Mortgage Solutions
"This latest rate hike will mean that a sizeable increase in mortgage payments is on the horizon for borrowers who fixed in the last two or three years at historically low rates. Coupled with the increased cost of living, this latest rate rise will hit most household budgets big time. Borrowers need to speak to a broker as soon as possible to have their circumstances and mortgage reviewed to make sure it is still within their budget, and be protected from any further potential increase later this year. How this impacts the property market will depend on what the Chancellor decides to do with regard to the Stamp Duty rules.

If there is a holiday, this may increase demand and in turn increase house prices similar to what we had after the first lockdown. However, buyers will potentially end up paying more for the house than the saving in stamp duty. This will lead to a greater mortgage debt and a higher interest rate, so the borrowing will cost more in the long term."

Ed Hutchings, head of rates at Aviva Investors
"With financial markets at the margin expecting a hike of 0.75 per cent, the decision to do 0.50 per cent but to begin quantitative tightening in October feels somewhat more of a balanced outcome for financial markets. However, given the backdrop of fiscal tailwinds, strong employment data and inflation yet to fall, I would expect both gilt yields and sterling to remain somewhat unloved for the foreseeable."

Samuel Fuller, director of Financial Markets Online
"The Bank was always going to stick to its guns in a week that saw Liz Truss completely change the game.

The Prime Ministerâs interventions on energy bills are big inflationary moves, worth hundreds of billions of pounds in the pockets of businesses and households nationwide.

This is very much a double-edged sword. Consumers will have more spending power than they expected, which will stoke demand, put a floor under prices and potentially push them up further.

It will also mean that the Bank is likely to need to raise rates faster in the coming months, which could result in a more severe contraction. Andrew Bailey has already predicted an imminent recession, presumably in the hope that his words alone could start to cool the economy.

One thing is for certain. The Bank of England is going to be on high alert, aware that inflation is the beast it still needs to tame while it continues to be fed. For now though, the gap between rates in the US and UK has widened this week, which means that dollar parity continues to beckon to the pound."

Melanie Baker, senior economist at Royal London Asset Management
"The Committee want to wait until November to fully digest the impact of fiscal changes. The pace of rate increases might plausibly step up then, depending on what else is happening in the economy and especially to measures of domestically-driven inflation. Three MPC members did vote for a 75 bps rate hike today [yesterday].

The decision to raise rates was clearly about inflation. They noted signs of continuing strength in domestically-generated inflation and suggested that the energy bill freeze would add to inflationary pressure in the medium term.

My forecasts assume that this is not the last BoE rate hike in this cycle by any means, with a peak of around 3.50 per cent next year and risks skewed to the upside of that projection."

Toby Sturgeon, global head of Fiduciary Investment Services at ZEDRA
"The Bank of England has voted five to four to increase base rates from 1.75 per cent to 2.25 per cent following their delayed announcement. It was interesting to note that three members of the Monetary Policy Committee voted to raise rates by 75 basis points. The Bank was keen to contain inflation and also to bolster sterling whilst perhaps mindful of a potential clash with the mini budget announcement from the new finance minister on Friday.

The inflation rate is currently 9.9 per cent and it is now expected to peak at 11 per cent, supported by the announcement from Liz Truss capping energy prices.

Overnight, policymakers in the US unanimously raised rates by 0.75 per cent for the third meeting in a row, fuelling fears of a hard landing for the US economy. Their guidance was also for future hikes which spooked equity markets initially but calmed as [Fed] Chairman [Jerome] Powell spoke. The Fed now sees rates at 4.4 per cent by year end, 1 percentage point higher than projected in June. The US Dollar index rose by over 1 per cent following the Fed announcement, pushing sterling down to a low just above $1.12. Sterling regained ground this morning before briefly falling back below $1.13 after the BoEâs decision."

Julian Jessop, economics fellow at the Institute of Economic Affairs
"The Bank of England MPC's decision to raise interest rates by just half a percentage point, when many other central banks have switched to three-quarter point moves, is another missed opportunity to regain credibility. Nonetheless, there are some mitigating factors.

First, many were worried that a smaller move might add to the downward pressure on the pound. However, the currency markets have reacted calmly, presumably taking the view that more aggressive tightening would have hit the UK economy hard. Second, the MPC confirmed that the Bank will press ahead with the gradual sales of UK government bonds that had been bought under the policy of âquantitative easingâ (QE). This is significant, both because it is another form of monetary tightening, and because there had been some speculation that the Bank would delay the start of active 'quantitative tightening' (QT) in order to help the government to finance the additional borrowing. That would have sent a terrible signal.

Third, the MPC clearly left the door open for further increases in interest rates, and soon. Indeed, three of the nine members did vote for a three-quarter point hike. The statement hinted that others wanted a little more time to assess the impact of the Energy Price Guarantee, and the upcoming "Growth Plan," on both demand and inflation, but that more action will follow in November.

However, even at the new level of 2.25 per cent, UK interest rates are still abnormally low and need to rise further to get inflation expectations back down and return inflation to the 2 per cent target again. No-one is suggesting that the Bank can do anything about global energy prices. But "core" inflation, excluding both energy and food, is now running at around 6 per cent. The extended period of very loose monetary policy has undoubtedly contributed to the cost of living crisis. Based on the inflation target of 2 per cent and the new target for economic growth of 2.5 per cent, the "new normal" for nominal interest rates might be in the range of 4 per cent to 5 per cent. The large uncertainties at the moment might justify keeping rates a bit below this range for a while, but the Bank should aim for 3 per cent to 4 per cent by mid-2023."