On A-Day, major pensions legislation was implemented in the UK: now pension scheme sponsors, scheme managers and members are catching up on ...

On A-Day, major pensions legislation was implemented in the UK: now pension scheme sponsors, scheme managers and members are catching up on the real and practical consequences of the new rules.

These rules improve the security and flexibility of retirement benefits for many. But the impact of an overall limit on the value of benefits that can be built up in a tax-favoured environment potentially limits the freedom that some UK executives enjoyed previously.

How the recent landscape has influenced the present
Until now, the maximum benefits payable from UK pension schemes were limited by reference to company service and, for more recent entrants, salary. This salary cap led companies to adopt various solutions to provide pensionable benefits on earnings above the cap.

The chart below shows the predominance of various solutions in place among FTSE100 companies before the recent change in the rules.

Before April 2006, the majority of companies were providing some top-up to pension, mainly via an Unfunded Unapproved Retirement Benefit Scheme (UURBS â usually on a defined benefit or DB basis). Less common alternatives included making an adjustment to salary or going via a Funded Unapproved Retirement Benefits Scheme (FURBS â usually on a defined contribution, or DC basis). Some companies had a variety of solutions.

From 6 April 2006, however, companies have had to implement alternatives, but have done so in a vacuum. Decisions have been based more on past practice than on any vision of the overall future of executive provision. Now, with this watershed date passed, companies have a chance to take stock and consider the opportunities open to them.

Which Way Are You Going?
A stimulating range of options exists for executives and executive boards to discuss, but standing still is not one of them. Companies have had to take action because many of the conditions under which the previous arrangements worked no longer hold.

For example, for tax reasons, contributions are no longer being paid to FURBS. These may be terminated and, depending on the status of the membership, as well as tax and legal implications, payments could be made to compensate the individuals concerned.

Many UURBS are being terminated and, where limits permit, transferred into the companyâs registered scheme. Transfers made before 6 July 2006 earn corporation tax relief.

Any UURBS set up on a DC basis might still work, depending on how the approved scheme is designed. Few companies offered these, but there could still be a valid place for them at some private companies, though under the new banner of an Employer Financed Retirement Benefit Scheme (EFRBS).

An EFRBS is not an approved scheme (or a registered scheme as it is now known). Although reserved on a companyâs balance sheet, there is no immediate funding of the benefit promise. Corporation tax relief is deferred until benefits, which can be taken in any form, are paid. If the design permits cash to be taken of less than 25 per cent by value and the remainder is taken as an annuity, then the proceeds can be paid free from employerâs National Insurance contributions (currently 12.8 per cent). The individual pays normal income tax on the entire proceeds (including the cash).

So What Are The Options? 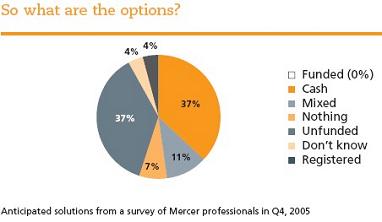 Coming in at number one on the âkeeping it simpleâ scale is the offer of only the registered scheme. Any funds built up in excess of the Lifetime Allowance (LTA), currently at Â£1.5m, either by design or inadvertently, can be taken as lump sum, but there is then a combined high rate of tax â currently 55 per cent.

Because contributions to the registered scheme attract corporation and individual tax relief as well as relief from National Insurance payments, and because the capital gains on funds are tax free, one could view this as reasonable. But planning in this way is unlikely to meet the expectation of existing executives or senior hires that their total benefits would still be payable in a more tax-effective way.
More commonly, companies are making top-up provisions.

Pensionsville
The EFRBS is now the only pension-related alternative for executives who are affected by the LTA. Surprisingly, a significant number of companies have elected to set up DB-style EFRBS for executives close to or above the new LTA. This is noteworthy because the tax position is not as favourable as it was under the previous regime. But it may be the combined attraction of security and the provision of similar benefits to those enjoyed before the changes are seen as advantages to which executives are accustomed.

For practical reasons, it is preferable that the executive be a member of only the registered scheme or an EFRBS and not both simultaneously. The change from a regime based on defined limits to one affected by value and allowances means that it can be difficult to predict in advance how much of the LTA may be used. Concurrent membership makes this calculation even more complex.

Advance planning is essential to maximise tax efficiency. The timing of movement between registered and unregistered schemes depends on the employeesâ individual career plans â whether they plan to retire early, how much cash they might elect from the scheme, what benefits they have accumulated already and, of course, their attitude toward risk. One wise solution from a corporate viewpoint is to hand responsibility for the final decision to the individual (possibly facilitating outside independent expert help for them).

Salary Supplements
The other common option is to pay a salary supplement. This is both taxable and subject to National Insurance contributions for the employer and employee â a significant extra cost of
12.8 per cent for the employer alone.

Typically, the salary top-up is at a level that is less than the cost of the corresponding defined benefits that the DB registered scheme would provide. This makes sense. The funding cost to the scheme will reflect all manner of judgements relevant to the company and the scheme as a whole, while the flexibility of cash can have a significant immediate value to the executive.

Common percentages are payments of 20 per cent to 30 per cent of pay compared with possibly twice that to fund executive DB pension provisions. Clearly this gap is large enough to cover the employerâs additional National Insurance expense created from making a top-up to salary rather than to a registered pension provision.

Some companies are sensitive to the disclosure requirements for the salary and benefits of directors. The payment of extra salary is very transparent when disclosed compared to the more indirect provision of unapproved retirement benefits.

Interestingly, some employers are offering choice: a choice of registered scheme or EFRBS, or between registered scheme and salary supplement. This ensures full responsibility rests with the individual. One consequence is that executives are not always selecting the options that are most expensive to the employer. Though this may seem illogical, perhaps it reflects the reality that pensions donât interest all individuals. The simplest route may satisfy their requirements, owing, for example, to the greater perceived security of the registered scheme.

What Now For Executives of UK Companies?
Surveys toward the end of 2005 anticipated a trend toward salary supplements for executives affected by the new limits. This is supported by our recent experience within the UK, where smaller companies or those wishing to define their costs prefer this route.

Larger companies, anchored by a commitment to defined benefits, are tending to embrace EFRBS. But even here some see the Revenueâs simplification as a catalyst for radical change and, as with the trend in registered scheme design, are opting for the salary route for future provision.

Many UK companies have now taken time to have discussions with executives about their retirement arrangements. The current level of understanding and awareness of pension matters is higher than in the past (countered somewhat by even more complexity of the underlying infrastructure). One thing companies can expect is that retirement benefits will be discussed at the recruitment stage with most, if not all, senior hires. It will become commonplace for companies to recruit someone who has already reached his or her LTA and is looking for alternative provision.

What Might The Future Offer?
Will a miscellaneous collection of possibly different, individual solutions be sustainable when the number of affected executives increases? In the UK, ten executives per company are affected by the new rules on average. What if this becomes fifty in five years? And what about the ones who have left by then? Who will be administering the communication, calculation and notification of amounts between the individuals, Her Majestyâs Revenue & Customs and the company?

For as long as this is seen as a pensions issue, perhaps the ad hoc and individual approach to provision (hopefully within a company-specific overall framework) is all that can be done. In the context of overall reward, we expect pensions to increasingly be seen as a key part of total compensation, although it may be driven to an extent by what executives demand. Companies need to be aware of the issues and decide now on their own policy and strategy in this area, in order to avoid each affected individual becoming a one-off case, resulting in an unstructured, costly and time-consuming mish-mash.